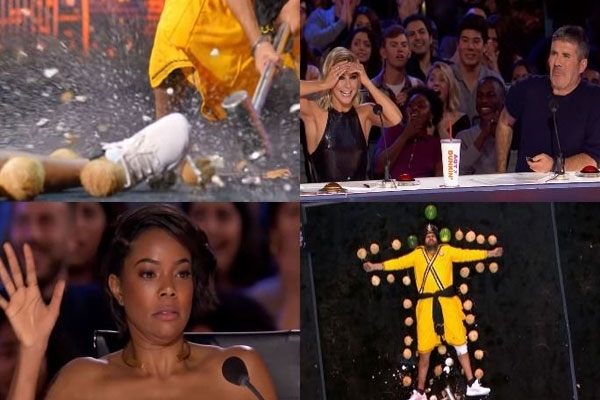 Watch: This Act by a Sikh Group on America’s Got Talent Will Make Your Heart Skip a Beat The act has a blindfolded man, Kawaljit Singh attempted to smash the fruits placed around Jagdeep Singh.
https://www.azwishesh.com/ 06 Jun, 2019 06 Jun, 2019

Watch: This Act by a Sikh Group on America’s Got Talent Will Make Your Heart Skip a Beat

Watch: This Act by a Sikh Group on America’s Got Talent Will Make Your Heart Skip a BeatHot Buzz

The Indians are moderately known for being audacious and this Sikh group has proved it over again on the international stage. The Bir Khalsa Group on America’s Got Talent’ left judges, audiences, and the viewers open-mouthed with their mind-blogging act.

As the smashing of the fruits begins, the viewers and judges watch in dread, some with their hands over their eyes. The composure of the participants as they execute the act received kudos from the judges.

The group has up till now took part in many talent shows in India and even holds a Guinness World record for smashing the most number of coconuts placed around a person.

The act clearly took the judges by surprise. They received a standing ovation at the end of the act from the judges and crowd. The video went viral online with more than 3 million views on YouTube alone.

"This Danger Act From India Will SCARE You With A SMASH!" wrote America's Got Talent while sharing the video on social media platforms.

"'How dangerous you want this act to be?' Both of them - 'Yes'" quipped one person in the comments section.

"The most insane and awesome performance yet at AGT 2019!" wrote another. "I'm shaking, scared and laughing at the same time while watching this," a third added.

World’s tallest policeman and a Punjab Police constable, Jagdeep Singh (9th Battalion PAP) symbolized immense heroism in the Internationally acclaimed show, America’s Got Talent. We are proud of his valour and strength of character. For Video, click here: https://t.co/MTdPtfhQk2