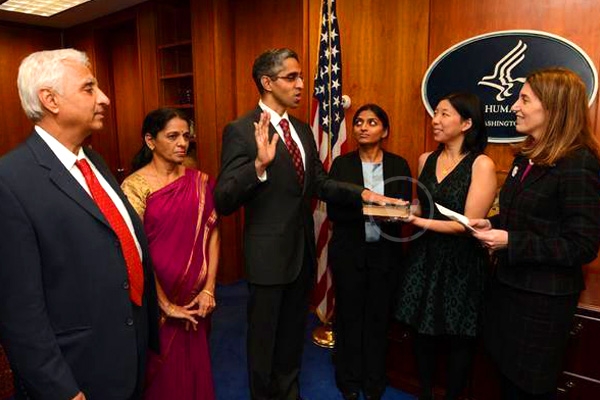 British-Indian American Vivek Hallegere Murthy has sworn-in as the Surgeon General. The oath taking ceremony was administered by Vice President Joe Biden in Virginia on Wednesday. The 37- years old Murthy is youngest-ever in-charge of country’s public health. He is highest ranking Indian-American in the Obama Adminstration.

The swearing-ceremony was attended by eminent Indian-Americans and the Health Secretary Sylvia Burwell, and Murthy took the oath on holy Gita. Murthy is an ex-officio Vice Admiral rank holder. Biden said that he was eminently qualified for the job and also described Murthy’s family as an incredible.

Murthy felt the job as an honour and profound responsibility; he thanked President Obama for believing in him. He termed his family’s support as an asset for his growth.

“My family was never supposed to have left our ancestral village. My father is the son of a farmer in rural India. He was supposed to have been a farmer, as was I. But for my grandfather’s insistence that his son get an education, even if that meant going into debt we might have never left that village to go out in the world and as my grandfather also insisted start fixing what needed fixing,” he said.

“We were not supposed to have become Americans. My parents stopped in three other countries including a brutal dictatorship on their journey to get here. They saved up money and scrounged for information about job opportunities, always knowing that America was the destination,” Murthy said.

He vowed to improve the public health in the country and said the Affordable Care Act can cover millions of Americans, and also said that much more is there to do. He said public health is an independent area and it is linked to education, employment, the environment and country’s economy.