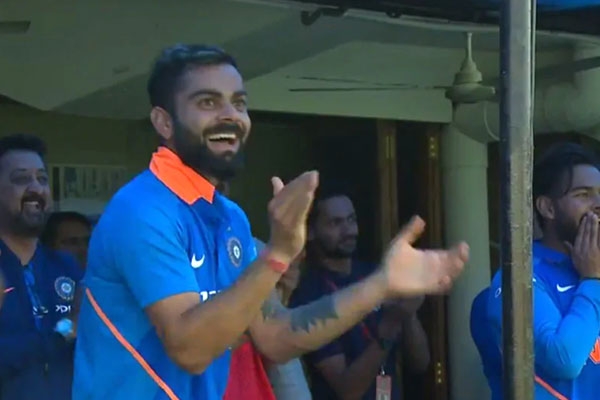 The Board of Control for Cricket in India (BCCI) shared a video of Skipper Virat Kohli applauding for Jasprit Bumrah after he smashed Pat Cummins for a six on last ball of the innings.

"That moment when @Jaspritbumrah93 hits the last ball for a maximum," the BCCI captioned the video

That moment when @Jaspritbumrah93 hits the last ball for a maximum #INDvAUS pic.twitter.com/e6iOHorg8N

But India faces yet another defeat as Australia won by 4 wickets to level five-match ODI series. Thanks to Peter Handscomb’s brilliant first international century and his 192-run stand for the third wicket with Usman Khawaja, who scored 91.

After the dismissal of Handscomb for 117, Ashton Turner put on one of the great performances ever seen by an Australian batsmen in India as he blasted 84 off 43 balls helped Australia chase down 359 and win by four wickets with 13 balls to spare to level the five-match series 2-2 on Sunday.

Earlier, India opted to bat first and posted a total of 358 with Shikhar Dhawan’s century 143 off 115 balls supported by Rohit Sharma’s 95 off 92 balls.